A Frazetta/Conan-inspired low-fantasy campaign originally whipped together as a one-off. 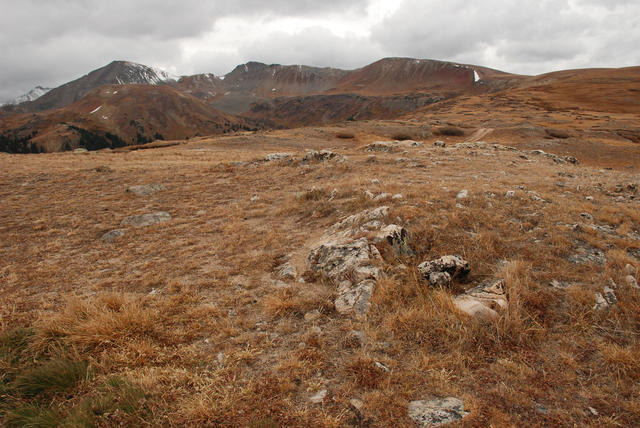 In the vast and timeless plains between the Dust Mountains and the Bora-Bora Steppe, a hardy clan of around 150 humans and their 20-30 orc slaves eek out a nomadic existence, following the yak. These people are called The Raj.

They tangle in lean times with a clan of orcs, called The Scourge. Each keeps the other species as their slaves.

Every few years, traders or adventures from the cities of the coast encounter the Raj. This is how the Raj have learned ways to make tools and weapons and helms of bronze.

They know not of steel or magic, though one elder was cast out decades ago for consorting with demons. His name was Loksha.

The Raj dwell in one place for no more than a few weeks, as this keeps the land fresh and fertile -- except in the fall and winter, when they hunker down in their leather tents for 5 months of frigid temperatures, nibbling on yak meat and cheese.

This summer, the Raj followed the wandering herd of massive longhair yak far to the northwest, near a forest that the elders say is forbidden.

Two nights ago, in the dead of night, a horrible beast, bigger than 10 yaks, ransacked the camp. Almost all the strongest warriors were injured, and seven were slain. Five women of child-bearing age were also crushed by the beast.

Most of the orc slaves escaped in the mayhem.

Yesterday, rumors circulated in the silence of clan leader Kong-buck’s indecision. Will the orcs bring back warriors? What was this beast? Have we angered the gods in the mountains?

Today, clan leader Kong-buck announced his intentions. In a feeble voice emanating from his scruffy gray face, he said,

This is bad. but we are the Raj. We will overcome. Today I send three of our best to track the beast and kill it!

My son Ro-buck will lead Eee-kay, our best hunter, and Tok, our best warrior, and we will be rid of the creature! Do not fear.

The rest of us will move south to the place where clean water comes from the rock. There we will defend against any orc attack. Do not fear. We are the Raj!

To Vanquish the Beast

Talented and gorgeous hunter Eee-kay led the menfolk northwest. After dark, Ro-buck's thin-limbed pot-bellied orc slave Mak sets up a tiny tent for his master. After a rainy night's sleep in the mud, the tracks of the great beast led the group to the edge of the Forbidden Forest, where tree damage from the creature's girth was apparent.

Undeterred, they entered the dark conifer grove, and soon encounter Loksha the outcast "wizard" (herbalist/alchemist), who tells the party that aggressive white apes inhabit the forest, and, furthermore, that he was responsible for the great beast's wrath due to a concoction malfunction.

Sure enough, four angry 7' semi-intelligent gorillas attack soon thereafter, and Tok and Ro-buck end up with bruised ribs but no further damage.

Beyond the forest, the wide and grassy valley sprawls at the foot of the arid Dust Mountains, inhabited by huge, furred, horned beasts.

Loksha explains that he provided his herbal concoction to the herd's dominant male in an attempt to tame him. Unfortunately it enraged him, causing the rampage upon the Raj. He further explains that he believes he has the antidote, which, if he can apply it to the right variety of grasses at the right stage of maturity, will be favored by the angry male and placate him. He proceeds to crawl about looking for the right blades of grass.

Meanwhile, the dominate male, standing four yards high at the shoulder, charges towards the party. They wisely disperse, and the beast conducts a series of charges in an attempt to skewer and/or trample various individuals, usually the largest target, Tok. During the excitement, the orc slave Mak slips away.

Eventually though, the great beast succeeds in running down both Tok and Ro-buck, nearly crushing the life from them both. Luckily, the blue-eyed huntress Eee-kay is there to finish the wounded creature off.

After a day's rest, Loksha tames a smaller rhino-beast, and the party rides it back to the clan as heroes.