A history-inspired campaign by Blair.

It is June 18th, 1815 at the closing moments of the Battle of Waterloo. Napoleon has just lost. Our team, largely unknown to each other (but there may be some acquaintances here) have found themselves at the same spot at the same moment, La Haye Sainte, a farmhouse unluckily situated at the center of the battle. How each has arrived here is up to the player. They had all been employed by one army or another, likely the victorious side, England and Prussia. But not necessarily.

A Prussian aide-de-camp suddenly appears through the smoke and approaches the group, beckoning them close. He has an offer.

Other requirements:High level mercenaries from anywhere in the world, each with a wide array of skills/techniques or extremely skilled in a few. This campaign is on the cusp of TL4/TL5, so many of the TL5 technologies will be available (such as rifling, steam, etc.), please confer with the GM. Magic has mostly faded from this world as colonization reaches the far corners and the Industrial Revolution looms, but many things can appear as magic (fantastic tracking or remarkable marksmanship) and superstition is still strong...

Episode One: The End of the Battle

The scene opens on the smoking, desolate remains of the farming compound La Haye Sainte, situated near the center of action of the Battle of Waterloo. It is June 18th, 1815. Our four characters are unknown to one another, various actors on this charred and demolished stage of history. One Mr. Adams, in a particularly clean British infantryman's uniform, approaches these men and offers them the job of finding and retaining one Mr. Napoleon Bonaparte. After introductions, instructions, and negotiations the men scrounge the battlefield for French uniforms, additional accoutrements and horses. Ben dons a tent, as there is no uniform that fits him. They depart to the southwest in the direction of Paris.

The travel is largely uneventful in the chaos of the aftermath of a major military engagement. Most of the other individuals and groups afield are members of the French Grand Armee and their allies, in various stages of disarray. As the day goes on these groups are beginning to coalesce and organize.

The group continues SW throughout the day, unmolested, until dusk when they happen upon a Belgian roadside hamlet that is teeming with French soldiers. Our group entered the hamlet boldly,but on high alert. Besides attention to Ben's size and clear origin, and Hanzo's origin the group entered the hamlet unassailed. Ben took the horses to the stable, while the rest of the group entered the clear center of the hamlet, the tavern. Amongst the usual assemblage of drunk soldiers they find the proprietor and a dashing and well-spoken gentleman in a French Dragoon Officer's uniform, named L'Anfiere.

L'Anfiere makes them welcome and introduces the team to a cozy spot amongst the crowded encampment. The group notices the sudden disappearance of Mr. Adams. Besides being bunked down amidst the enemy, the night passed uneventfully. In the morning, a roadblock had been set up at the hamlet, and it was dutifully staffed with soldiers. A new set of papers was drawn up for our team, and they departed towards Paris.

The morning was largely uneventful, but the various groups of French soldiers appeared to be rallied and better organized from the previous day's debacle. The team comes across another hamlet, with a roadblock. As they stop to consider how to approach, a volley of gunfire erupts from the distant hamlet. It appears the the unit manning the waystation is being assaulted from their rear. From this distance it is difficult to get a clear picture, but the military experience of the group tells them that this is a small engagement, likely skirmishers disrupting order behind enemy lines. Johann believes that the attacking party is Prussian. Mr. Adams makes a humble reappearance and is immediately grilled by the team. As it turns out he is a Prussian aide d'camp/agent. And explains that he thought that a British approach to the problem of Napoleon would be better. He is suspiciously readmitted into the group.

Johann believes that these Prussian skirmishers would be of help. As the gun battle dies down, he leads the group towards the general direction of the skirmishers rally point. He is correct, and after a touchy introduction, everybody is accepted and the Prussian unit helps the team through the next few miles of territory and to their secret forward camp.

The next day the team makes its careful way into the suburbs of Paris. To a smuggling contact of Johann's, in the suburb of Choesy on the Seine River.

Our group has found itself at the sprawling, chaotic riverside chateau of Robespierre, one of Johannes contacts, a French smuggler. Robespierre warmly receives the group and agrees to insert them into Paris, early the next morning. The heroes explore the manse, full of ill-gotten gains and the ill-gotten getters and revelers, and find refuge in a sprawling wing of some long-beheaded aristocrat's pompous abode. Along the way they encounter Robespierre's wife Eloise, who is a literal and figurative mountain of a woman and mountain of influence in the house. It is difficult to tell if she is intoxicated or simply intoxicating to those around her. She instantly notices Ben and makes her intentions instantly and non-verbally clear... The crew manages to escape her grasp, momentarily. Ben finds an lofty aerie to settle down, after horsing around with some kids. Johannes seeks the bosom of a fine Spanish woman and her wine. Hanzo settles into a light meditation on the ascetic notions of Shinto.

As the night noisily crescendo's into wanton chaos around the group, Johannes suddenly gets a chill of warning, disentangles from this night's quarry, and, peeking out of his door spies Eloise and minions sneaking down the corridor, towards Ben's hide-away. He alerts Hanzo and they stealthily pursue, for a minute before Hanzo decides to honorably face his enemies on "equal" ground and makes their presence known. Eloise dispatches two thugs to deal with this annoyance and continues upwards in pursuit of her prey. Johannes successfully stabs one thug, to only prick him. He gets bashed for his troubles, likely breaking a couple ribs. Hanzo carefully draws his 6' bow in the confines of this third floor hallway and plants an arrow into the chest of the basher. He quick draws another arrow and finishes thug 2. Thug 1 retreats to the spiral stairwell and falls down the steps, much to Hanzo's chagrin as there goes one arrow.

In the meantime, Eloise finally gets to Ben's rooms. He is alerted to their presence, she attempts to have her minions subdue the giant, but in a comedy of large bodies in a confined space, nothing comes of the actions, and our crew is whisked away by Robespierre, protecting his operation and, maybe, his wife. While awaiting the arrangement of the barges on a pier the group finds secondary instructions implanted in each member's effects. Letters mentioning a a secondary goal for each character, the continued influence of L'Anfiere and the need for secrecy. Hanzo immediately shares his letter with the group. He is to bed one Maria Von Glaustonberg, the mistress to Field Marshal Blucher, to glean any intelligence that may be useful to whoever planted the letter. After a largely uneventful trip to Paris, our heroes arrive at a bustling, riverside marketplace. They do note the unusual (usual, for a city on the verge of being besieged) amount of military and police patrols.

Ben and Hanzo immediately search for a bunk for the night. They quickly find a suitable place that, oddly, says on one side of the sign, Gay Mermaid, and on the other side, Game or Maid. They are puzzled for a moment. Johannes and Rheinhold decide to pursue their intelligence contacts for further information. Johannes meets with a Belgian diplomat, after some wheeling and dealing at the front gate of the Belgian consulate. The contact is unhappy and bothered to see Johannes, extremely busy and clearly worried about the current situation in Paris.

Hanzo explores the neighborhood and finds a sake bar! In 1815 Paris!? But, of course! Hanzo happily makes a contact with the proprietor who is happy to see a countryman and impressed by the immediate and clear social standing of this particular countryman. He is an impoverished nobody, but has lived in Paris for sometime. WHen the group reconvenes they put together the intel that Johannes and Rheinhold have retrieved and decide to reconnoiter Malmasison, Josephine Bonaparte's former residence, near Paris and the government headquarters of Versaille.

Current intelligence (this is a little more complete than came out in the gameplay, but important to the group's progress): The big picture: Napoleon's current whereabouts and political/societal situation are unknown to everybody! Is he done? What is he planning? Do the French still support him? What control does he have over his army and navy?

England: just won this important land battle, but have the greatest sphere of control over the planet. Ever. With their navy and the East Indies Trading Company. They are not aggressively pursuing occupation of France or Napoleon.

Prussia: Has the biggest and best land army. Ever. And they definitely interested in expanding their influence on the European continent.

French: Are reeling from the loss at Waterloo. Their army is still large and influential, but splintered. Corps and divisions are largely following their commanders and generals, independently, and effectively, but only locally with little influence on the big picture.

Everybody else: is doing the power vacuum doe-see-doe. Trying to guess who will come out on top and who's bed they should try to get into.

On a slightly smaller scale, apropos to our heroes: Rheinhold is now clearly in the Prussian camp. The British, on land, do not really care about much. L'Anfiere is a well-known French officer, and societal figure, with a massive amount of influence. Anyone who is n'importe qui knows L'Anfiere, but very few truly know him and his motivations. Most say that he is very high ranking in the current, but crumbling, French regime. Some say loyal to Napoleon, some say loyal to the fleur de lys (Vive La France!), some say that L'Anfiere is ultimately loyal to L'Anfiere.

And, no solid evidence pointing to Napoleon's location, but Malmaison seems as good as any other place. 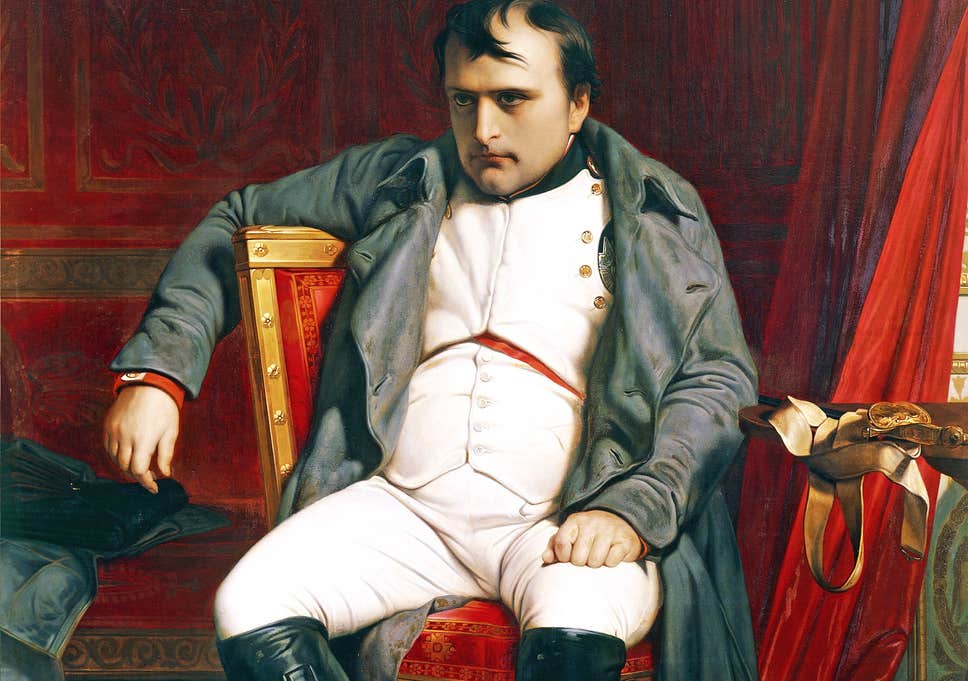